So, I’m deep into my revision of Starfighters: Infection, my 1000-page epic sci-fi story. One thing that’s utterly fascinating to me, having lived through drafting this thing, is how the PSR turned out.

I figured out the storyform pretty early in the draft (around page 30) and it turned out to be correct, though I recall I wasn’t certain of Driver until the midpoint. However, I had some trouble using the PSR while writing. Although I had loosely outlined the story, it was sort of just a “bunch of important scenes” outline, which I knew where they vaguely were in the story, and knew a couple of them were Act Turns, but definitely hadn’t connected all the dots.

While drafting, I tried to use the PSR but kind of gave up by Act 2… I found I had trouble seeing which PSR item I was currently on, and sometimes it seemed like the PSR items were going in different orders, repeating, etc. The one thing I did find was the entire QUAD of the PSR always felt right, e.g. the feeling of Closure/Hope/Dream/Denial was absolutely perfect for OS Act 3, and I decided that was good enough. So while drafting I felt like I was hitting various PSR items at various times throughout the act. And I was happy to just let that happen.

But lo and behold, now that I have a complete draft and have gone through and analyzed every single scene to see what the exact conflict is … the PSR sequences are SUPER clear to me. I can even give each sequence of scenes a title that fits perfectly, like an act within an act.

Here’s an example from my notes on the first two acts (focused on OS):

One other thing that fascinates me is that, while drafting Act 1 I was still trying very hard to use the PSR, and I made a mistake. I knew a few important interrogation scenes were coming up, and I saw that PSR #1 of OS SP2 was Investigation. So I assumed that an earlier event was the act turn, and that the interrogations took place at the beginning of Act 2 (because of how well they seemed to fit Investigation). 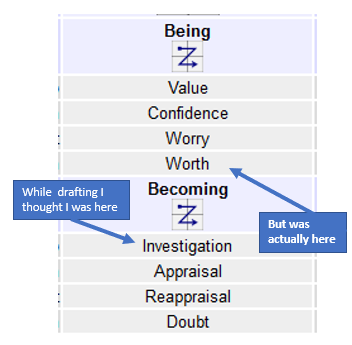 But it turned out I was wrong, the Act Turn hadn’t happened yet – the interrogations were squarely in PSR item #4 (Worth) of OS Act 1. And reading the draft now, I can totally see where some of that Investigation-focused stuff falls completely flat, like it’s missing the point. Meanwhile, there is a bunch of Worth stuff in there that’s pure gold (thank you muse).

My lesson learned from this is that, it’s cool to outline your story using PSR if you’re consistent with it. But if you’re going through it more loosely (like I was, and like I think I always will – I can’t write from a detailed outline), you may be better off using the PSR as a vague guide, being careful not to force anything.

This is so solid Mike. First and foremost, congratulations on the completion of your first draft. This is really amazing news.
Secondly I’d like to ask; what’s your chapter structure like? Is a single scene a chapter in your work or what was your rationale in chapter creation?

Secondly I’d like to ask; what’s your chapter structure like? Is a single scene a chapter in your work or what was your rationale in chapter creation?

I think placing it into chapters will be one of the last things I do. There are a few places where I’ve marked off that they would be perfect for chapter breaks, but other than that I’m not sure yet.

Definitely it will be more than one scene per chapter. The way I’m marking scenes I have over 300! But this is a method that marks scenes based on conflict (and I think tends to align with Dramatica’s PRCO) so you end up with more scenes than you think you had when writing. Often what I thought was one scene turned out to be two or three.

Congratulations on your tome. That’s a lot of pages.

I have had similar experiences, where I feel like I’m racing through the PSR, but I know I haven’t hit the act turns yet.

Solid. This lends some insight. I’ve been outlining and writing with the PSR also. I’ll share my process sometime soon as well. Just need to iron out a few kinks. Thanks a lot for sharing your process.

God speed in your journey toward completion.

What I don’t really get is why your OS feels so personal to me. For example, let’s take “worry”. You describe every character and their specific worry, but I wonder how you fit all that information into your scenes there?

Isn’t worry in the context of being in the OS meant to portray the overall “angst” of the collective? Does it have to be that personal? Wouldn’t you describe this more from an objective point of view like for example having characters act irrationally or a fight breaking out in the group or maybe some sort of cold-war like stand off between nations/fractions/planets or something among those lines in order to illustrate what worry means in the context of the state of being of the largest possible perspective on the complete scope of your story at that particular time?

It’s not criticism, it’s a question. I personally don’t feel I have quite understood the nature of OS. How big is it?

Thanks for the questions @houtje. Discussing Dramatica in the context of actual story examples is my favourite thing!

I personally don’t feel I have quite understood the nature of OS. How big is it?

Do you mean in my story, or the OS in general? The best way to think of the OS is to figure out the Story Goal. The OS is generally everything related to the Goal (including all the stuff in the OS Domain too, which is kind of an umbrella over the Goal).

For example, let’s take “worry”. You describe every character and their specific worry, but I wonder how you fit all that information into your scenes there?

The point of that section is that in each case Worry is causing or driving conflict in the OS. It doesn’t matter whether it’s one specific character worrying, versus a group doing the worrying. It could be either. What matters is that it’s related to the OS. In my case the OS is about the Firelion Club and the rather poor job they’re doing of defending the Earth from the Unworlded aliens. In this sequence, Worry acts to drive conflict that “stirs the pot” in the plot, and embroils the main characters further into everything.

Note that I wrote that stuff without realizing how Worry was working (at this point I’m not sure if I was confident enough in the storyform to start using the PSR, although I may have looked at the quad as a whole – Value/Confidence/Worry/Worth).

Hopefully my example above helped, but I thought I’d expand on this:

Isn’t worry in the context of being in the OS meant to portray the overall “angst” of the collective? Does it have to be that personal? Wouldn’t you describe this more from an objective point of view like for example having characters act irrationally or a fight breaking out in the group or maybe some sort of cold-war like stand off…

It definitely doesn’t have to be so personal, but it can be. The OS beats / story points don’t have to focus on a group, they can focus on individual characters or groups, as long as they relate to the OS. As an example, Inigo is an OS character in The Princess Bride, but his quest to avenge his father feels plenty personal. (Note that it is not a quest simply to kill, but to make the six-fingered man conceive that he made a mistake killing his father, hence the importance of his famous “You killed my father. Prepare to die” speech. This is a good example of the OS Concern, where a character wrapped up in the Story Goal also has his own sort of side goal or conflict that fits the Concern.)

It’s more at the level of the outline/treatment (say 1-4 pages) where the throughlines show their nature – an objective attempt to attain a goal (OS), a struggle with personal issues (MC), an outside view of a different approach to personal issues (IC), a relationship facing conflict or change (RS). When you go deep into the story, into the scenes and the characters’ heads, it’s hard to see those big-picture natures.

Right. It may help to watch some films whose OS content seems pretty subjective on the surface. Romantic comedies like Notting Hill or Bridget Jones’s Diary, or something like Like Water For Chocolate. The content of the OS is whatever, but the point of the OS is the objective view of that.

The word objective when describing the OS describes the perspective you’re taking on it, not the story’s content.

From my work so far, this is how I think of it.

Plot is objective and focuses more on the sense of progress in the story. This motion is made even more entertaining when you have twists and so on. Think: rollercoaster.

Story is the meaning of things as illustrated in your story. It is allowed to meander, to explore context of things more richly.
Note, for me, the RS -though objective- is what I use to create interesting situations by proximity or some other index for the characters involved in Story.