“I had an additional thought that the website wouldn’t let me post separately from the other reply, insisting I choose ‘edit’ and add.”

Maybe it’s not a frequent enough issue to worry about, but obviously it happens from time to time.

I got it too. My guess is it’s a change that was made to keep one person from posting again until someone else has replied to the comment to prevent one-person discussions.

I think that’s exactly what it is. Maybe it’s not a very flexible function, but if it is I feel like the threshhold is a bit “tight”. I just wanted to make sure Jim knew about it in case he’s never encountered it, and it came from the company that wrote the code for the website.

Very aware of this. To prevent spamming and encourage productive dialect, I switched it so conversation would be more of a round robin type of thing.

Say whatever you want and then give time for others to respond and participate.

It’s not a bad idea but I found it to be very restrictive. For example, I tried to respond to two people after they both commented on what I’d stated earlier, but it didn’t let me. I had to bundle both responses in the same response. This will take some getting used to, but I think that it’ll also make ones responses jumbled and not clean enough.

Can you point me to what this looks like? I’m wondering if it’s actually better this way…

This will take some getting used to, but I think that it’ll also make ones responses jumbled and not clean enough.

It’s almost like every choice has a Cost and a Dividend.

Can you point me to what this looks like?

I couldn’t do it, so I can’t screenshot it for you. But what this requires is responding to everyone in one post, not replying to people with their own posts.

The only real problem that I have encountered with it is when I returned to a thread a couple of days after a post and was then unable to post. I could edit my previous post, but I have no idea if that alerts people to my new content.

In lieu of a screenshot, you can also post a direct link - at the bottom of every response is a “chain-link” icon - copy and paste that into a response here (but only one at a time lol)

To be honest, I’m not sure what you want us to show you.

I’m going to keep replying until I get the error, I guess.

I’m even going to talk to myself.

So… nothing seems to be happening this time around.

I’m editing this. If you get an alert, then editing shouldn’t be a problem. If you don’t, then editing might be an issue because people are adding to a conversation but nobody is being told.

I’m not sure I consider this to be a problem. I only told you because @Prish had to e-mail me to let me know she had commented by editing a previous comment.

It would be helpful to see where the restriction on posting over and over again is somehow detrimental to productive conversation.

Ok Jim. I’ll respond to you right now and then attempt to do the same for @MWollaeger immediately after.

It just happened so I had to edit and then respond to @MWollaeger here.

Here are the screenshots.

So… nothing seems to be happening this time around. 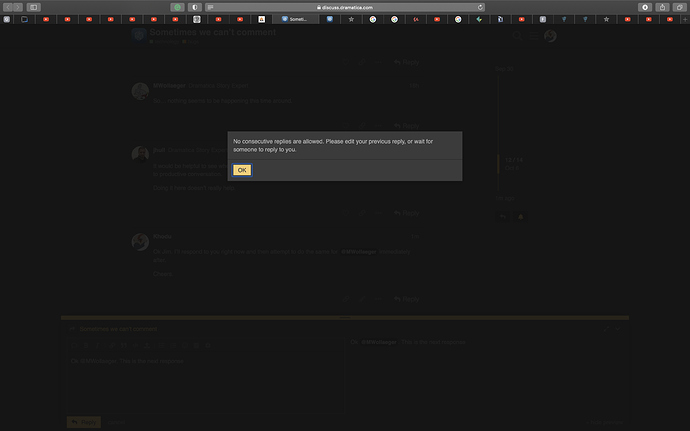 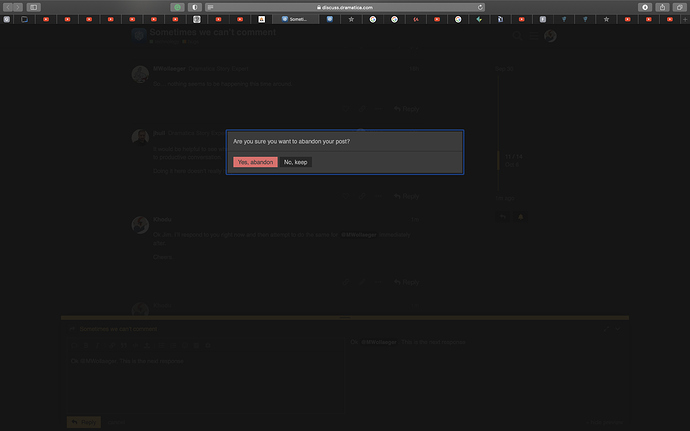 I’m asking if you can please leave a link to a conversation where the restrictions on multiple postings made it more difficult to carry on a productive conversation about Dramatica.

Cognition wise, it’s easier for me to understand things if I read all the steps (posts) leading up to conclusions. Huge fat posts that go on and on scare me away.

Did you come to this thread because I put your name into a post, or did you come of your own accord?

Actually, I can’t remember exactly … kind of a ‘chicken or egg first’ dilemma. I scan new topics, often. Also, I had read your initial post with my name and quote referenced in an automatic notice email, previously. As I recall, when I scanned this topic, I thought “Oh, that was this one!”

Well, you would have gotten the text today, so I’m going to venture that you didn’t get a new text although you did get one a while ago.

That’s the best I can do @Jim. I edited my earlier post and nobody noticed.

I don’t know this is a problem. I only mentioned it in the first place because Prish had to e-mail me to see a comment and I didn’t know if this was something you knew about or it was a new feature of the base code after an upgrade.

So, I looked at my email app, and I notice there was an email that came in at 7:42 pm where you replied to my cognition wise post. I didn’t notice it, before. It seems that it just ‘landed’ ‘manifested’ or whatever, not appearing until now. (maybe some kind of lag?)

OK, I GET IT. When I went to reply to a post of Jim’s, right after I replied to MWollaeger, I got a “no consecutive replies allowed” that someone had to answer before I could reply to one of Jim’s post in this topic because that would make me having several posts in a row. So, I will include in this post the screenshots I was going to give Jim for the information he wanted, etc. The point I wanted to make was if I am just a reader of the topic or most of the topic, I would never know that more information had been added to something I had already read. Maybe, some colored graphic would help to alert users to the fact that more information had been added to previous posts. Perhaps, highlighting additions a different color each time, in case it happens many times?

I would suggest that the original user poster have the freedom to apply the highlighting of additions, since sometimes it could just be grammatical editing, etc. 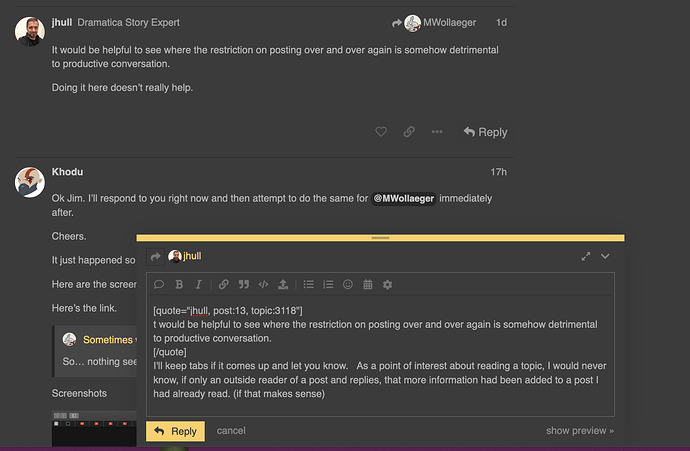 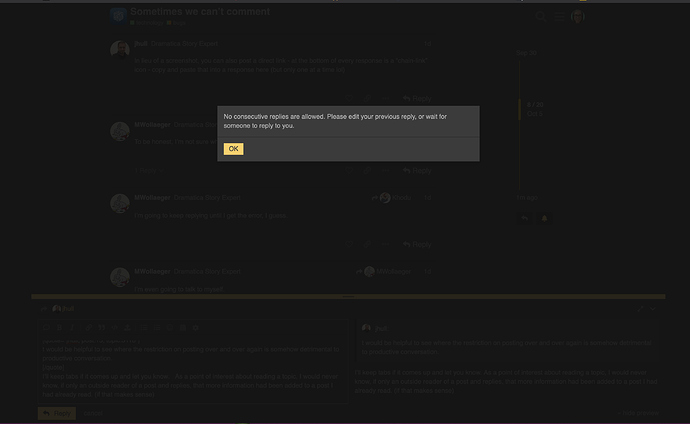