I think it is ok to look at it like a skeleton. Why not? Maybe a Frankenstein skeleton. However, we take four complete stories and we piece meal them together to tell a fifth story. Granted, we focus on the MC, but all the stories are weaving in and out. So, your one constant POV (hopefully): the audience. You bring the other Throughlines in and out of that.

To me, that means you can see a individual story, combined stories, but never two stories separated… unless you watch an experimental film like:

I’m sure it already exists, but I’m intrigued y the idea of Timecode plus audience choice. I imagine that a director could take it further by allowing a person to mute whichever story they felt… so throughout the film, you could choose which of the four stories interested you the most. Or eventually you could watch all four.

Until someone does that and makes it popular, we will just have to do it Dramatica style. Or other variations of this: i.e., the film/play called Rosencrantz and Guildenstern are dead. Which is, apparently, entirely available on YouTube:

Other features: that’s a standup desk. and the Mac book pro is on a great cheap cardboard stand called Pillar by Foald. 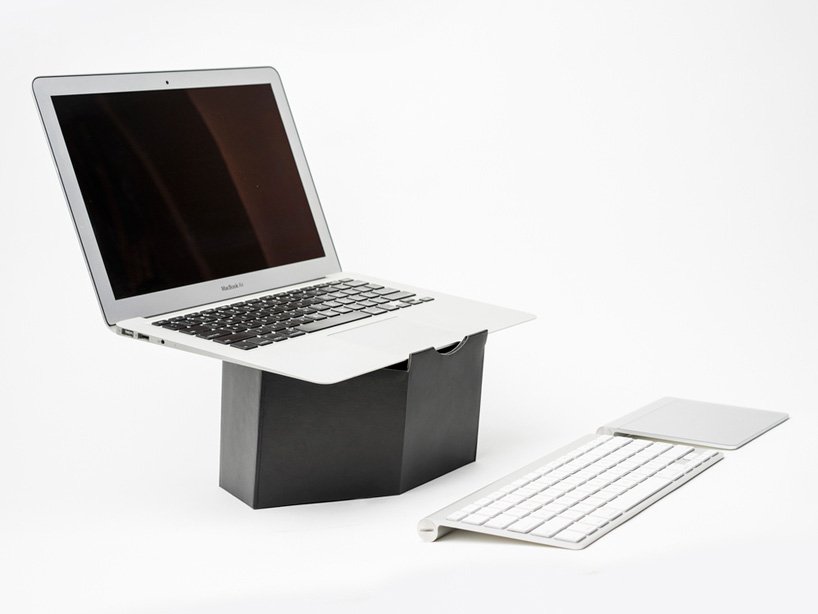 'pillar' raises your notebook computer to the correct height, with the top of the screen near eye-level

whoops, the business at foald.com failed but that’s what it looked like. Too bad. Wish I’d bought two.

I have been intrigued by the stand up desk idea for years, but unfortunately, I haven’t made the move. I imagine this is because I am a pacer. Pacing helps me think.

Back when I made my first attempt to return to professional work, my employer got me a sit/stand desk. It was really nice. I’ve always thought that, if I should be able to return to pro work, I’m defiantly going to get another one.

Like you, I do my best thinking when I’m moving around.

Me too. Other people hate it. Too bad.

This one was pretty cheap, about 175 bucks on Amazon. I can confirm that I write differently standing up than sitting down. More controlled. Sitting down, more immersive. Beats me which is better.

I think Hemingway used to stand up in his bedroom and type away. Probably in his undies.

This reminds me of when I was in college. I have two degrees. One of them is in computers. The other is in anthropology. We had a guest from the Obispo (if I remember correctly) visit us. She told us that the most unnatural thing she had experienced since leaving home was visiting the produce section of a large grocery store (Kroger, if that means anything to any of you). She said the vegetables were all too perfect.

If you look at my computer desk, you’ll find stacks of books (I long ago learned that pdf files just aren’t as good as old fashioned books when it comes to studying or researching), a largely empty coffee mug, bags of snacks closed tight to eat later, etc.

It exists as an abomination against the laws of Man and God. No doubt it will one day face the Fury of a Time Lord. 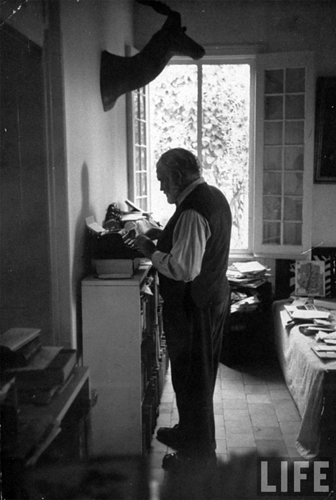 I love his devotion to his work and love this picture.

Just had a hell of an experience listening on audio to Big Two Hearted River parts 1 and 2. It’s always been tough to get through, just reading it, for me. Listening to it, though, was transformative.

This caught my attention, and I remembered this thread. This is the chapter in Inside the Clockwork where Melanie explains why the software only arranges the throughlines in dynamic pairs, not in cooperative or dependent pairs. 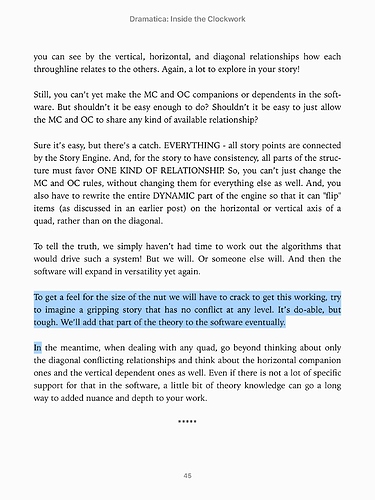