Has anyone heard of MAP or Chris Huntley explain Dramatica as a logic engine? Reading through Aristotelian Logic over lockdown, seems clear to me that that is what Dramatica is, fundamentally.

The Dramatica engine requires four syllogisms, of which only two need be stated (MC and OS) as the other two are logically inferred from these. The Western bias of Dramatica could indeed be altered, therefore, by designing the engine such that deciding on SS and IC would result in MC and OS syllogisms being inferred. By syllogism I mean three categorical statements, having a logical consequence (success/failure, good/bad: being the story conclusion).

Here are the four figures in this, traditional, logic – seen here with their Dramatica counterparts:

Very many more syllogistic figures are seen in the execution of Dramatica’s logic engine because it incorporates both valid (good, success stories) and invalid (failure, bad stories) syllogisms in its system.

The rubix cube nature of the Dramatica engine is as a result of the application of the rules of inference in logic. In the first place, there is the traditional square of opposition, showing some of the relationships between characters in Dramatica and its overall quadratic nature: 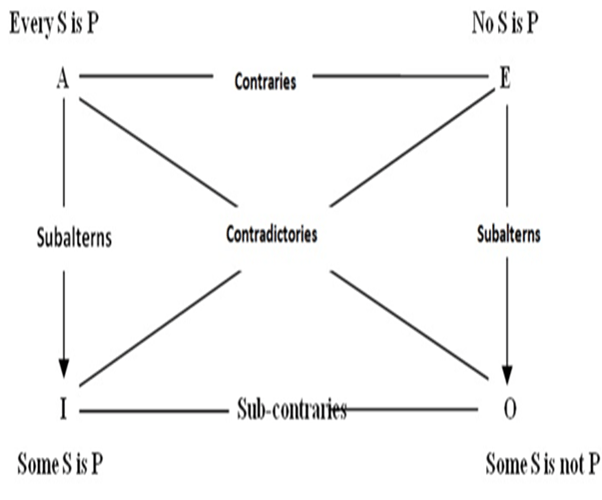 The Rubix cube-like engine of syllogisms is further jumbled with conversion (switching the subject and predicate of the syllogism), obversion (changing statement to opposite quality and changes predicate to its complement), contraposition (switches the subject and predicate and changes both terms to their complement), obverted converse, obverted contrapositive, inversion and obverted inverse. Dramatica’s conversions of deduction, induction, abduction, reduction and production relate to these, I think.

At issue in a lot of this is Logic’s concern with the Middle Term – switched about to great, but invisible, effect – and called the Crucial Element in Dramatica.

Has anyone heard MAP and CH explain Dramatica in this way – as an engine for Logic (the second of the traditional seven liberal arts, the third being Rhetoric which would be Dramatica’s information on Storytelling.) If it were explained in this way it would end a lot of the confusion / mystery, I think, and give rise to a whole new vista of usefulness. Thanks.

Do you have any good links you could share that you read over lockdown so I can understand these better?

There are books for school kids which I read - Traditional Logic I and II by Martin Cothran, mainly. I also looked at Logic Demystified by Boutelle. After that, the main text book used in college (far as I can see) is Introduction to Logic by Irving Copi. It is comprehensive and well written.

Not these however, which are different types of (advanced) logic which aren’t used in Dramatica (I believe):
Predicate Logic
Boolean Logic
Modern / Symbolic Logic

So interesting.
(It’s curious for me to remember that my logic class did not have a text book.)

Boolean Logic is also based in Fours, which makes it promising as a possibility for some kind of overlap.