Justifications (can want need should)

Can
Want
Need
Should

Is there a connection between the verb and the realm (KTAD)? Like If the UNLESS is knowledge I should use can vs should? I feel like I missed this development.

No, I don’t think so. It just comes down to what comes closest to what you want to say/convey.

Any verb used to help explain the justification is up to the author’s intention behind the inequity. Can, Want, Need, Should are all just ways the mind may justify part of a truth. The important part is that you’re describing a justified truth, that when pitted against other truth will create a sort of contradiction.

Remember that all of these justifications are not the storytelling, but the storyforming. Fully developed, you’ll have a “treatment” that describes how the inequity is explored beat by beat… like a guide to inform your writing, but not BE your writing.

We will be going over more examples and taking any questions in the next Conflict Corner this Wednesday at 1pm.

I just read this amazing story of how they came up with dramatica and, melanie said can, want, should, need was the first quad they came up with!
And this really interesting point related to the difficulty sometimes of seeing tkad in the elements…it is, if I’m understanding right, because justifications are all about hiding that initial can want should need from ourselves…wow. 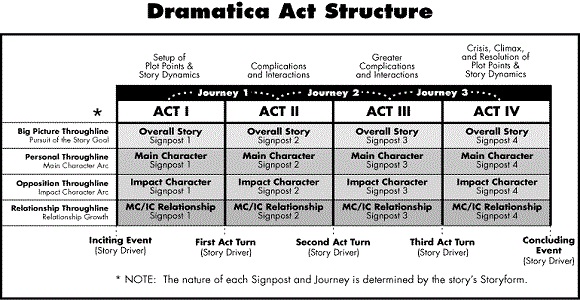 Dramatica – How We Did It

(Originally written in 2012 and re-posted here) As I approach my sixtieth birthday, I imagine the time is ripe to resolve some of the questions I’ve been getting in regard to the origin and d…


"our next step was to separate all the post-it-notes into two independent sets, one with the internal perspective and the other with the external perspective. This wasn’t as easy as it sounds because each perspective is built of many different elements which, because of the progression of TKAD, are more of a spectrum ranging in the Mind set from purely internal all the way to just this side of external. And, naturally, the Universe perspective operates the same way.

In fact, by the time we worked our way from the highest magnitude perspective (pure Mind or pure Universe) to the elements of the “smallest” quads, like those containing the character elements, the two perspectives are almost looking at the same thing.

Consider – real Truth cannot be seen, but we approach it by looking within ourselves and also looking out toward our world. What we see in each direction reflects what we see in the other. And in the emerging Dramatica model, it seemed to us that the elements of each perspective were really the same items – just seen from two sides, an interface between the two.

So, we came up with a graphic representation of each set – two pyramids, one for Universe and one for Mind, with the same elements at the bottom of each because when you got that far down, it turned out the items in the quad one level up resolved themselves, were made up of the very same basic building blocks."