Choose Your Own Adventure

In a side project, I’m working on creating some short stories integrating them into a CYOA type of larger narrative. For YA/adult.

So, my first question is, if I want to keep as close as I can to Dramatica theory, how should I structure the different levels of my flowchart?

I plan to work backwards from a +/+ premise, then change the story structure at plot points/choices.

First of all, it sounds like a nightmare to try to integrate Dramatica theory.

Second question (face-palm, but I have to ask)
Would this technically be an action driver story? Since decisions are emphasized? Or do decisions force actions?

I’m no expert, but it sounds like it would be a hell of a lot of work.

The storyforms are so linked to every story point that having multiple endings (success/good; failure/good, etc.) would radically change the storyform/signpost order and the premise. I’m not sure how you’ll be able to get them all to work as one cohesive and satisfying story.

I guess the one possible way I could see it working is if you have a decision early on that (secretly) dictates which ending you get* and then all of the choices in that ‘branch’ would be storytelling leading you to that ending. But, even then, it’s a lot of work (you’re basically writing four storyforms) and may not be all that interesting to readers once they realize they’re being funneled toward a certain ending.

I would also imagine that you could go either way on drivers, depending on the context.

I’m interested to hear the thoughts of others. I think it can absolutely be done, but it’s probably going to be really difficult to pull off. 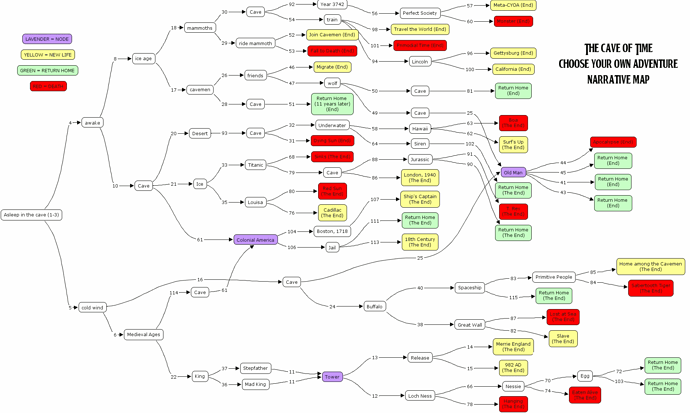 So here is the overview of how a typical CYOA works.

I’d need the choices to be predictive. Like choosing between going toward a Understanding conflict or an Obtaining conflict, which is predictive of the ending.

This Action-driver plot, for instance, gives all four options for the endings, no matter what

I think it can absolutely be done, but it’s probably going to be really difficult to pull off.

That was my first thought, given that Signpost order is linked to Outcome and Judgement, but not in ways that are immediately obvious.

I wonder if there’s a way to experiment with Resolve – like if there’s a point where a character is Steadfast vs Changed and that changes the outcome and hence the last signpost?

My advice would be to have one path that leads to a complete story, and is maybe the only path that leads to that ending or something. Let all other paths be tales. And then somehow find a way to let the reader know there is a preferred path to get to that one ending so they know to look for it.

Yes, this was my thought. Actually, two “full” paths, longer stories one to absolute failure and one to great success, meaningful. The others are “shortened lives” that just mean, “oops. bad decision.”

if you have a decision early on that (secretly) dictates which ending you get* and then all of the choices in that ‘branch’ would be storytelling leading you to that ending.

Of course, from the chart, you can see that’s what is in fact happening. It’s not a random series of decisions, but if you choose the choices you are “supposed to” you end at the best of all possible endings. And vice versa.

But like most stories, midpoint determines if you’re going to make it or not.

The other advice is generally to have the reader making choices for the Protagonist and not the MC.

Protagonist and not the MC

Would this mean OS activity, MC universe? I thought “one against the world” was OS universe MC activity (Braveheart, Fugitive, Home Alone). I guess I’m assuming a choice-based story needs to be Activity-domain driven. I guess it still can be PSR driven.

This is very helpful. Thanks.

Two full paths means two full stories being told in one book, and presumably with other options available as well. This is going to be one thick cyoa.

I don’t know how or if this would work, but here’s another suggestion. Don’t write two full stories to fit into the book. Instead, write out each signpost for a Success story and give the audience the choice to move through them in the proper order. Then simply flip the story engine from Success to failure. Then give the audience the choice to proceed through the story in that manner.

This alone wouldn’t work perfectly as certain other Storyform appreciations would need to be changed accordingly. But it should minimize the number of signposts and endings that you would have to write. And if you decide that only one path be a perfectly told grand argument story, then it would allow you to write even fewer additional chapters as one path could be a GAS that’s just slightly broken.

The choice for the path would be difficult because it would allow the reader to experience a well structured GAS, a moderately structured GAS, or, presumably, many many broken tales. In order to guarantee a GAS, you’d need some mechanic that had the reader choose a single path up front and follow it throughout. Perhaps letting them know that there is an A path and a B path and that they can make any choice they wanted, strictly following A or B would provide the best or most meaningful experience.

There are a few other ways you might address the differences between a Success and a Failure story while minimizing the amount you have to include. Perhaps a single set of Signposts, but a Journey for good and a journey for bad. Then each signpost could offer the choice of journey, but each journey would require moving to a predetermined next signpost.

I don’t know, though. That might not work the way I’m picturing it.

Perhaps a single set of Signposts, but a Journey for good and a journey for bad.

I’m looking at the signposts and how they change for different endings. Set are: OS Future/Choice MC Obtaining Action Driver and OS SP1-Present

This is my hope.

I’m not following. I assume it can be any domain structure.

So, the hardest thing about a cyoa is that it’s hard to align all the domains. And the moment you monkey with things, you screw up the alignment of the signpost order in some throughline.

To that end, here is another suggestion about structure. Have one storyform. Use it for all paths. This way, all of the signposts will align and the story will feel right no matter what path you take.

Now, to create the variability in the story you want, use Cost, Limit, Benchmark and maybe some other dynamics.

Now, create Failure by having certain paths hit their limits too soon. A Timelock runs out in the third signpost, say. An Optionlock has a character go into a room that kills them. (These will be aborted grand argument stories, not exactly Tales.)

Some paths will swap out a Success with a Pyrrhic Victory—Success at too high a cost.

I’m assuming a Benchmark can sort of be used the same way. Say it’s Obtaining, but you turn it into “more and more people in your party die. You find the treasure, but now there is no way to return back through the cave because there is nobody to hold your lines as you rappel.” (Which works with a Requirements>Obtaining.)

Or maybe the Obstacle Character has a Benchmark>Preconscious and they snap and kill you upon seeing the treasure. Hopefully tracking it like this will prevent it from feeling like a Deus ex Machina.

This is something I am really interested in as it pertains to things like video game writing. I just finished Cyberpunk 2077 and think (despite what many reviews say!) it actually has some really solid writing. It for sure has an influence character as well. Not to get this too off topic, but as someone who has been curious about writing for gaming I really want to know how one would make something like this work! It often becomes too overwhelming for me to figure out…I know Melanie has mentioned this type of thing before and I think she came to the conclusion that to have a GAS in a medium like this it would be easier to think of it after the audience has read through/played through each story option and how it looks “after” it’s finished. Still confusing imo but less intimidating to approach. Like, it doesn’t have to be perfect, as long as the beats are all hit in a way that is clear to the audience, I think that’s what’s most important.

I’d need the choices to be predictive. Like choosing between going toward a Understanding conflict or an Obtaining conflict, which is predictive of the ending.

As an update, I have created a complete CYOA using options within Dramatica (kind of how we can flip options as authors in the create stage). I have the work on hold temporarily while I’m involved in my current work, but plan to pick it up and finish it in February or early March. I actually did all the hard work of planning each step according to storyform with a huge GAS flowchart (which, truth be told is much easier than actually sitting down to write).

in as it pertains to things like video game writing.

After I’m done, I’ll share the plan with you. According to the merger of I think 3 or 4 GAS, I have a CYOA GAS where all of the options end with a GAS, no matter what choice you make. The thematic premise is different for each one, and due to the shorter nature of a CYOA it doesn’t have HUGE PSR conflicts per se, hat-tip to the Conflict Corner and our esteemed teachers.

It does have a faith element, since I am a Christian fiction writer, but once it’s online, I’ll share it with whoever would like to check out what I’ve done. Just send me a PM.