Induction, seeing a course of action and seeing that it might possibly continue to run the same way (This could actually happen! Woo hoo! I mean, uh oh!)

Deduction, seeing a number of events and determining the certainty that another events is caused or related (I am certain THIS made it happen)

Reduction, seeing a course of action and calculating probabilities of outcomes (How likely is this to happen?)

Production, seeing a course of action and analyzing the size and scope of the changes that will occur should it happen. (How big a deal is it if it happens?)

I’ve always found the bully story helpful to keep these four apart. I’ll have to try and find it again (or someone helpful can find them for me, tia).

Induction: The bully comes back again. “I was too easy on you the last couple times. This time, you only get one guess.” “Okay. Since you already did 1 and 5, you probably won’t do those. I think you’ll do something closer to the middle. But because you’re so full of yourself, you’ll pick something bigger than 3. So is it 4?” “You got lucky, punk!”

Production: The bully comes back one more time. “All right, enough games. This time, you get zero guesses.” You shrug and say, “Fair enough.” Then you kick him in the crotch and run away. 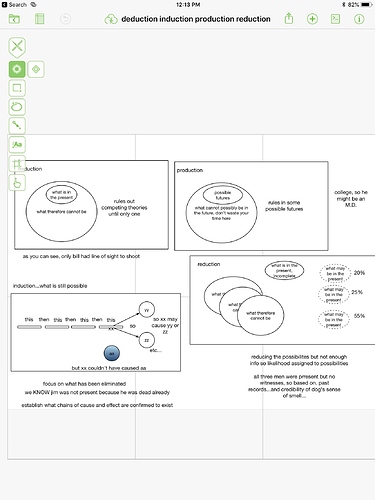 An even simpler way to think about these four (in terms of why they cause problems):

haha as in GetSchwifty WHY are you making SUCH A PRODUCTION out of this?!

And then I flounce offstage in a huff.

Oh wait we did that already

Up In The Air is a GREAT example of Reduction as a problem. (I still have a minor issue with the very end of that film, they seem to be going back on MC Resolve & Judgment or trying to leave those points “up in the air”. But the rest is fantastic!)

I’ve always wanted to see that movie, has a great rep and for Pete’s sake Ed Asner. I’ll check it out. He’s lead in Dosto’s THE IDIOT which I just audibled.

By the way audible book fans, apropos of nothing Dramatica: Benedict Cumberpatch reading THE ORDER OF TIME by Carlo Rovelli. You WILL thank me. I could listen to this guy read the phone book, if we still had phone books.

This is probably off-topic and might be better in another thread, but I don’t know how to do that yet.

Up In The Air is a GREAT example of Reduction as a problem.

I love this movie, but then I love Clooney (as seen in my bio).

(I still have a minor issue with the very end of that film, they seem to be going back on MC Resolve & Judgment or trying to leave those points “up in the air”. But the rest is fantastic!)

[spoilers ahead for Up in the Air]

In what way? It was super clear to me in that final scene exactly where he sits: he lets go of his suitcase (a radical change from the beginning of the story, where he’s waxing lyrical about how he can fit his whole life into one bag), and the look on his face as he takes in the endless possibilities on that board is definitely not a happy one. It’s like now that he’s experienced a life of ‘baggage’, the idea of living life as a free man just isn’t quite as appealing anymore. Even the voice-over is pretty bleak:

Tonight most people will be welcomed home by jumping dogs and squealing kids. Their spouses will ask about their day, and tonight they’ll sleep. The stars will wheel forth from their daytime hiding places; and one of those lights, slightly brighter than the rest, will be my wingtip passing over.

You could be right – it’s been a while since I saw it. But I specifically remember not knowing whether he was happy about going back to his old life (flying on planes all the time), or not. My wife and I talked about it after and we were both like “that was dumb, why did he act like he was happy about it?” Maybe not the very last scene but one of the final few.

I guess we may have both just misinterpreted something, and reinforced each other’s misinterpretation.

also to do with tense right?

Deduction, given a b c then d must have happened (past)

Induction, since a b c are happening, then it’s still possible for d to happen in the future (present perfect leading to future). D hasn’t been eliminated as a possible future.

Reduction, given that a, b and c didn’t happen, or didn’t happen in part, then it is only 50% likely that that d will happen now. (missing piece in the past, resulting in an uncertain future)

Production, given that a b and c are happening then there’s reason to be VERY optimistic that d can happen in the future! college means a ph.d! Or he might end up owning the college. Or he might be President! Failure is NOT an option!

The more I look at these the more I can see all kinds of gradations and ways to play with them…fascinating.

Of course they each have + and - charges.

Responding to your article, I would say actually that generalizing about, say, races (all blacks are stupid, all whites are racist, all asians are good with math, all Italians are gangsters) or genders (all men are violent, all women have wild mood swings), is a common failing in characters that they must learn to correct.

I will definitely add these to the list, but probably won’t add to the article as it kind of undermines the whole purpose of it

that last moment is the moment you have just after you’ve done something inappropriate and you suddenly see yourself as others see you. of course, that’s never happened to me but I thought some of you could identify with it.

it seems there’s not only a process that’s called in this case but a noun/object that’s returned, that has properties

coming up with a complete chart of these would be helpful, yes? People?

hmm so maybe something like this is going on… 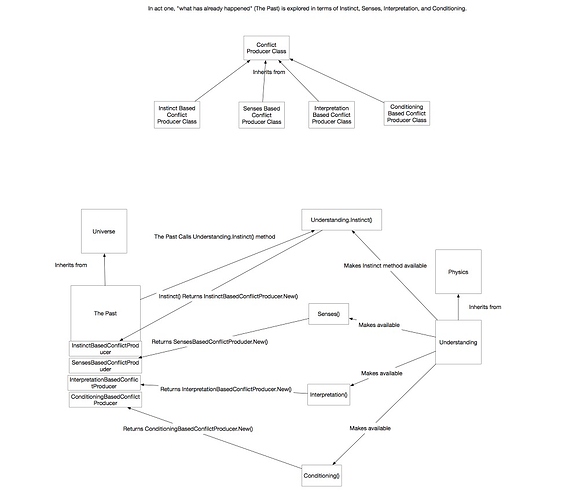 In short, the Understanding object makes four methods available: Instinct() Senses() Interpretation() and Conditioning. Each method returns an object that is a subclass of ConflictProducerType, as shown at the top of the diagram. ThePast object (or perhaps just class) calls each of the four methods and stores each returned Conflict Producer type object. Each subclassed instance of the Conflict Producer type has its own methods: the methods on the Conflict Producer class, inherited by the subclass, then special methods on each subclass such as InstinctConflictProducer, which has conflict methods specific to Instincts (and so on for Senses, Interpretation and Conditioning).

Not shown: the methods on the ConflictProducer class, or on the subclasses.

Physics.Learning() calls Investigation>certainty()
Returns “during an investigation, arriving at a conclusion that something is absolutely true”
Process: arriving at conclusion
Conflict: others fear that certainty will lead him towards their secret, or just the secret is hard to find out, hard to get to

Physics.Learning() calls Investigation>reaction()
Returns “as other try to block, responding with more actions to learn the truth, or he reacts to what he knows with disbelief and hurt feelings, or with anger, or with delight because now he can use that"
Process: responding to their blocking
Conflict: evasion, untruth and failure

Physics.Learning() calls Investigation>potentiality()
Returns “having learned the hidden facts, determining that now something else might be true because of it”
Process: determining
Conflict: their secret is exposed and others attack or retreat and scramble to deal with consequences of reveal, or his feelings are devastated and his worldview changed by what he’s learned and what he now thinks might be true,"

NOTE certainty exists in four quads. impressed once more with how important it is to understand the specific quad the PSR elements are members of.

and that is how you firm up a cause and effect line. Starting to see more how Dramatica method works, you can focus on these little nuggets of conflict/cause and effect, then string them together…but it works best if you REALLY FOCUS on one quad at a time, like a jeweler focusing, that level. don’t worry about the whole story in the first part of the process, just shape your little nugget and get it right.

tried this one this morning…

Universe.Present() calls Learning.prerequisites()
Returns “getting the prerequisites for learning about someone’s strategy”
Process: getting something
Emerging Conflict: you steal something and are almost caught or someone finds something is missing”

Universe.Present() calls Learning.Strategy()
Returns “learning about someone’s strategy” or “you learn the details of someone’s strategy”
Process: learning or discovering or finding
Emerging Conflict: some want to stop strategy, some are afraid to

Universe.Present() calls Learning.preconditions()
Returns “they identify preconditions before the strategy can succeed, and that gives them an attack point and maybe decides which analysis is correct”
Process: identifying
Emerging Conflict: interfering with the preconditions

…I wonder if there’s a more active one …

For those of you still here, I found my Evernote copy of the bullying story. It’s here, if you’d like it.