I’m having some trouble brainstorming the kinds of balance a holistic character can make with a Projection/Speculation (condition/adjustment). The difference between possibility and probability. It’s not as simple as belief/doubt. Any suggestions?

For context, it’s a 16yo foster kid dealing with his identity. He’s a scientist wannabe working on a hypothesis/experiment. The problem is, I can’t feel the difference between probable (projection) and possible (speculation). Should I make the two things so vastly different? (K vs A or T vs D ?) Is that how to have tension there? Or do I need to create a justification?

“I need to test a scientific hypothesis in order to feel successful in life UNLESS the experiment risks the lives of people and sends me to jail.” It still seems too narrow. And linear.

I’m having some trouble brainstorming the kinds of balance a holistic character can make with a Projection/Speculation (condition/adjustment). The difference between possibility and probability. It’s not as simple as belief/doubt. Any suggestions?.. The problem is, I can’t feel the difference between probable (projection) and possible (speculation)

Are you asking about how a holistic mindset approaches an inequity or the difference between projection and speculation?

“I need to test a scientific hypothesis in order to feel successful in life UNLESS the experiment risks the lives of people and sends me to jail.” It still seems too narrow. And linear.

Now that you mention it, having two justifications and trying to choose only one or the other does seem like kind of a linear way to do it. Very black and white/binary.

I wonder if throwing some balance into it would make it feel more like a holistic approach. “I’ll address the need to test a scientific hypothesis in order to feel successful while balancing it with the risking of lives that could send me to jail.”

foster kid dealing with his identity. He’s a scientist wannabe

Why does he want to be successful? I would be interested in the ongoing dynamics of his family blending, while watching/reading. Could that be a probable/possible item, also?

I wonder if part of the problem is that you aren’t honing in on the actual elements enough? The example looks more like Test and maybe Possibility.

the difference between projection and speculation?

Well, speculation and projection are the difference between possible and probable, which is minute. I’m asking how this can be demonstrated on a larger scale, with a HOLISTIC problem solver, since possible and probable are still very very similar, not seeming to be opposites (like doubt/faith are)

I need to speculate about where

UNLESS I should guess

I still can’t see much tension between speculation and projection.

I think in context he’s delving into a field that is speculative (not test). It really doesn’t have evidence (previous studies) and foundation for his way-out-there hypothesis other than a maybe. Think alchemy.

So maybe I need to flavor it with the Issues (OS Sense of Self and MC Falsehood), like…

I can speculate in a way-out field of science in order to make it big and answer Big Questions I have about the world UNLESS they are right about me anyway and i’m just a loser criminal who probably belongs behind bars UNLESS there is something else they’re telling me about my value that I’m not hearing.

Would HOLISTIC need a second UNLESS?

FWIW Patterson is a Holistic film with a Problem of Speculation. I haven’t seen it though.

Have you seen Knives Out? That’s Linear, but has a Problem of Speculation. Jim had interesting things to say about Speculation/Projection in our analysis thread but he joins pretty far down (so you’ll want to scroll toward the end).

I still can’t see much tension between speculation and projection.

My example was only including speculation (speculation vs. speculation). For sure you’d want to do another set of justifications for projection. That might give you a feel for the tension between them.

Would HOLISTIC need a second UNLESS?

Jim actually addresses the difference between Linear and Holistic justification process in his article. We’ve tended to only go up to 2nd level justifications because they offer a lot of “meat” / emotional depth for storytelling. But if you want to get a feel for Holistic you could go to the 3rd level and use the Becoming quad. (Whereas at the 3rd level a Linear mindset would justify with the Conceptualizing quad.)

In https://narrativefirst.com/articles/the-complete-guide-to-justification look for The Holistic Third Level of Justification.

Well, speculation and projection are the difference between possible and probable, which is minute

To understand the difference, try this. Draw a wave. Then label some point on the wave as Probability. The closer to the crest that point is, the more probable it is. The important thing when looking for a probability is that you only look at that one point.

Now draw a line that goes from one end of the wave to the other and label the whole wave as Possibility. In order to see the possibilities, you have to look at the whole wave.

Now do the same with projection and speculation, or fate and destiny, or faith and disbelief, or pretty much any dynamic pair.

This is immensely useful. So, question… for each dynamic pair, is one element always going to be the wave and the other always the particle view of the wave? Or is it a reciprocal relationship, if that’s the right word for it, a matter of which you choose as the POV thing?

(To be clear, this is not a criticism of this model whatsoever - either way, it opens up a very different view of the dynamic elements relationship for me!)

I was quickly drawing this for myself yesterday … 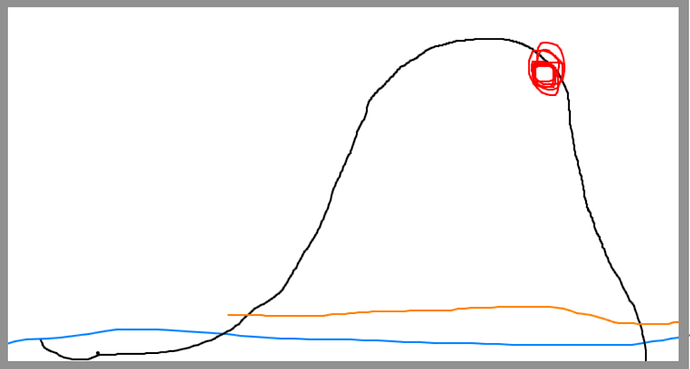 Gregs Example:
Possibility as Line, looking at the wave as a whole
Probability as Point, looking at one point

which is the wave and which is particle?

I was running through some other examples. In my opinion it depends on the context of the story and it can be either or.

Example:
Consider the whole, Reconsider a point
Induction includes everything, deduction looks on one thing
Trust everything, Test some points
Accurate all, None-accurate are some points

Equity and Inequity are taken as Justice and Injustice, which is the wave and which is particle?

In my opinion, but might be depend on your context
Justice is the line and looks at everything (the rules given)
Injustice looks at one specific point (the rule broken)

Consider the whole, Reconsider a point
Induction includes everything, deduction looks on one thing
Trust everything, Test some points
Accurate all, None-accurate are some points

These are all great examples! But I think you’re right, it might all depend on your context.

Diogenes saw all of Athenian society as corrupt (the wave view of Inequity or maybe Non-Accurate), so he walked the city with a lantern looking for one honest man (the particle view of Equity or Accurate).

In the Book of Genesis, God tells Abraham the cities of Sodom and Gomorrah are sinful and he will destroy them (Wave view of Inequity). Abraham ask what if there are 50 good people? What if there are 45? 40?..and so on. (Particle view of Equity)

Or… I might be confusing two versions of justifications between a single element here - likely Equity. Hmm.

Dramatica-ly speaking, Probability is about what is most likely while Possibility looks at the range of likely alternatives. You can flip wave length with wave height for another perspective, but unless/until you are able to do that while also knowing what it means I would refrain from switching views in this manner while using Dramatica.

But of course that leads to the question of how to know which term is the particle view and which the wave. The definitions often hold a clue. For instance, the Dramatica dictionary says you can have many fates but only one destiny, which suggests to me a range-or wave-of fates with a single-or a point of-destiny.

Since Equity is always seen from a particle view on the DTSE, I would suggest to always treat it as a point on the wave. And all that means is that you are looking for a point of Equity within a range of Inequities.

Also keep in mind that this view is not so much about which one is a wave or a particle as much as seeing how the terms are different from one another, even when the definitions seem really similar.

-On an unrelated note, ever wonder why the RS is so different from the rest? See the table above. It’s looking at waves within waves, ranges within ranges, changes within changes. This is why the MC just looks like a source of conflict for me, but the relationship looks like the changing of the space between us. It’s why relationships don’t just look like sources of conflict, but like conflict that drives the relationship together or apart, or to be weaker or stronger.

Not sure if this has been resolved…but I’ll bite because I had an MC with exactly this!

Her problem/condition was Projection. She had a type of amnesiac disorder, which caused her to “project” into the future that the same thing would always happen (nothing mattered, because she was going to forget everything sooner or later). She couldn’t realistically just jump to speculating that, well, maybe someday that wouldn’t happen, like in a linear story. To her, losing memories is as certain as the sun coming up every morning. It will happen. But projecting things in such a “hopeless” or negative way caused her problems! Throughout the story, she learns to balance this projection into the future, with speculation - just because she forgets things doesn’t mean they are not important.

I think the premise I ended up with was “Allowing your speculations of what might be to balance out your anticipating how things will be will address resistance to (Objective Premise).” Sounds kinda hefty, but all it really means is that in ONLY projecting, my MC was creating self-fulfilling prophecies. By balancing this with allowing her self to also speculate what COULD be/happen for her in the future, she can start addressing new things rather than running around in circles. Because it is holistic, it’s more mindful than just jumping to, well, who knows what could happen? Let’s speculate on all of the possibilities! Because this isn’t realistic for my MC. She is holistic, as is the storymind.

I have no idea if this helped. I find that finding a premise REALLY helps me figure out what I am saying, and if I am saying what I WANT to say.

For sure, probability and possibility are closely related to projection and speculation, but there are nuanced differences. If you feel that your story is better suited for projection rather than probability, why? I think finding the answer to that question will help!