Continuing the discussion from New films for analysis?:

I agree with Star Trek II: The Wrath of Khan
I also wouldn’t mind seeing analysis of Star Wars 5 and 6

Mr. Montalban received more than one vote. Anyone up for an online analysis starting the first week of August?

Just for people to get into the mood: 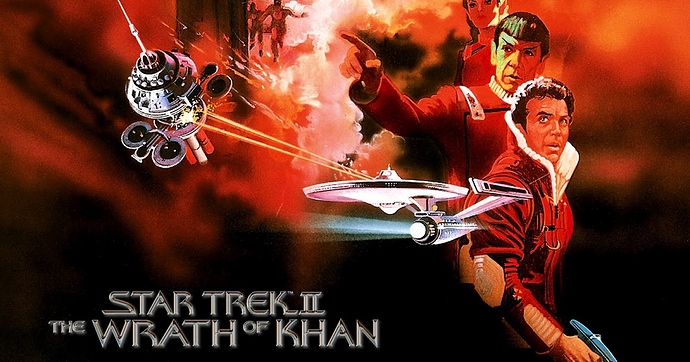 Movies I Like: Star Trek II: The Wrath of Khan

--> If you weren’t around in 1982 you missed a crazy-good year for film. I have often said that it was the last great year for...

im up for participating! do we take the entire week to analyze?

I would try and watch it over the weekend if you can. Next week we will start analyzing it all together here. Kind of like the Users Group meeting where we go one by one through the different questions. I’ll moderate to help keep everything on track.

Count me in, too! I started one already, but I’ll watch it again and try.

Wrath of Khan is on Netflix instant.

So… when will this get started?

Starting with the Four Throughlines – who has an idea about the Overall Story Throughline?

Probably stating the obvious, but the overall story is most likey about defeating Khan (and the Genesis Device?). The story starts with Chekov and Company finding Khan and it ends with his death (and the use of the Genesis Device).

I believe the OS throughline is something of a cat and mouse game, where each side is trying to destroy each other. I want to say the domain is Activity with a concern of Doing. Khan is continuously doing something that is trying to lure Kirk into his traps to then destroy him and Kirk responds by doing something to one-up him and get an upper hand. I would say the Issue is Experience and one example is when Kirk was struggling to find a way to gain the advantage Spock says “Khan is highly intelligent but he lacks experience. His pattern indicates two-dimensional thinking.” So even though he’s extremely intelligent, Khan lacks the experience of strategic encounters in space warfare.

The Driver would be Action as I feel the inequity starts when Khan uses Federation fleet members to ask Carol Marcus for the Genesis device. As this throws Marcus and her team into a frenzy about what is going on and leads to her getting Kirk involved. Kirk then makes the Decision to investigate. Action concludes the OS when Khan detonates the device with him on-board and therefore ending the struggle.

Timelock due to the crisis coming about with the detonation of a bomb and the Enterprise needing to escape. Success because Khan is defeated and the Enterprise members survive. Good because although Kirk lost Spock he gained a better appreciation of Spock’s wisdom and better understanding of his own limitations with experience i.e. Kirk himself never faced a no win situation which Khan forced upon him.

I agree with the Activity Domain and Doing Concern. Experience is good as well. Not only does it work with the scene you described, but it fits in with age, rebirth and other things. Then there is the scene where they lower his shields, and the scene where they trick him with the whole hours/days code, showing their experience versus his lack of the same.

I disagree with Timelock. While there are two instances of “ticking clocks” (repair of the enterprise and activation of the Genesis Device) they seem to only exist for specific sequences rather than the whole story.

(@jhull Not sure if we’re going too fast here)

We need to figure out what the Throughlines are before diving into the whole storyform process. This avoids the unnecessary consequence of confirmation bias!

The way this has worked well in the past is if I moderate it a la the way Chris does in the Users Group Meetings. I’ll ask questions along the way and make sure we don’t get off on to many tangents. It’s important that we have a consensus about each and every topic so that we can assume the same “story mind.”

A vengeful superhuman got a means to escape from his exile.

The only other problem that comes to mind is the Genesis device ending up the wrong hands.

*Apologies for the jumping the gun I assumed you meant the entire throughline.

The only other problem that comes to mind is the Genesis device ending up the wrong hands.

That doesn’t happen until the second half, right? It seems more like raising the stakes than the overall problem. Although the danger is always there.

It seems to me that overall story, before Khan jumps in, is finding a suitable place to perform the Genisis Experiment.
Then there is getting the new crew ready for the new Enterprise.

A vengeful superhuman got a means to escape from his exile.

…and is seeking revenge on Kirk and the Enterprise. “The Wrath of Khan” pretty much describes the Overall Story Throughline, yes? I’m not sure what’s problematic about the Genesis device and how that affects everyone. Seems to me that Khan’s Wrath is what is generating a lot of inequity.

The main character is Kirk and he appears to be driven by adventure. At first he is feeling couped up in the Admiral role but his close friends reaffirm that’s not where he belongs. Carol Marcus even reminds him that he bailed on her to fulfill that need. Then he is driven by his desire to win when up against Khan.

As Dan310 said, Kirk would be the Main Character. His issues seem to revolve around his age and whether he should still be out there adventuring. (His last lines are “young. I feel young”). Adding to the subject of age, he is confronted with death and the no-win scenario, although that might be a more objective issue.