Table of Scenes & every possible story point on a single page

@Dan310, if you’re on Windows with Dramatica Pro 4, all you need to do is click the button to export to a text file. I am not sure how it works on a Mac.

Thanks, Rod but I’m on mac. 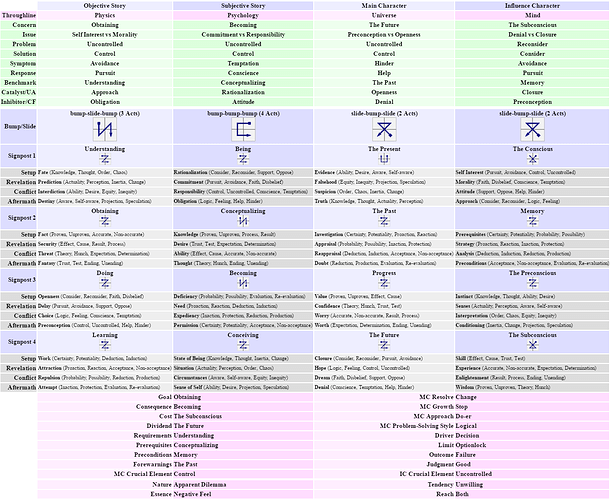 @bobRaskoph Wow, you’re quick… When will that be implemented in the online version?

I needed to know whether this was okay or not. Do you have any suggestions for the icons’ placement or is this fine as it is?

Looks great to me! Better than ok… Give yourself more credit.

Too cool. I’m not so sure the Elements under the Variations in the model at rest always go along for the ride. Any chance you can redo it without the elements listed (in the Plot Sequence section).

Oh, and this has to be in the next version. Thanks!

I’m not so sure the Elements under the Variations in the model at rest always go along for the ride.

Does that mean that the elements from the original quad (in the same position) would go along instead? Just curious if there’s a way to make that determination.

No, there isn’t a way to make the determination and it would likely be not very useful to a writer. At that resolution the story process becomes way too mechanical. @bobRaskoph’s tool is a nice one, just would be nice if it was accurate up to the resolution that is necessary.

@bobRaskoph I find it amazing how quickly you have been able to implement any ideas I’ve thrown out there. You really DID mean magic, didn’t you?

Any chance of giving it the option to use the current vocabulary (e.g. “Activities” rather than “Physics”) At the top level it’s easy to switch over in one’s mind but at the concern level (when you start getting terms like “preconscious”) I find it a bit confusing compared to modern Dramatica terminology.

That’s a great idea, Sebastien. Personally I use a mix of old and new terms, so I have to manually go in and change certain ones. I agree about the deeper levels getting more confusing. I always mix up Subconscious and Preconscious.

@Rod My magic is called “unemployment.” It’s very effective in getting me invested in any sort of project.

@bobRaskoph
Looks like the starting dot and ending arrow aren’t showing up on the images anymore, at least for me.

By the way, the elements from my list are in the default order as they appear in the model: Top left, bottom right, top right, bottom left. (All except for the Knowledge variation, where I accidentally put Process before Result.) I think one could probably explore any quad of elements and relate it to the Variation involved. So, really, the default elements under each variation might better be seen as suggestions to get the imagination going.

As Jim pointed out, as long as all the higher level points are accurate, there’s no need to sweat the small stuff.

I cannot sus out what it is expecting

PlotSeqRep is copied into submit form as is

PlotSeqRep is copied into submit form as is

I can’t really do much with that information. Please send me your two texts per PM.

@Rod What browser are you using? When I do it with Chrome and Firefox, it shows the arrows and such.

@ Everyone, I’ll probably try to clean up the code in the next few days. This could mean that the tool won’t be available during certain times.

Your code now seems to be readable - better keep that style up!

Let me please put a question up.

Well, what if these elements are somehow linked to the character quads of motiv-purp-eval-meth and get listed up as well?